You know index cards? I started using them for Agile note taking.

I have been experimenting using index cards for taking notes for a while and I have recently “formalised” my method by combining short notes with priority highlighting and action indication.

There’s several reasons why I like Agile note taking

It really is very simple – have a look at the picture (notes are blurred to hide client related information) : 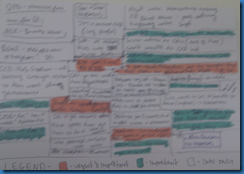 You can build whatever shapes you like (I prefer square like shapes) and write your notes the way you prefer. I enjoy building a uneven brick-like wall by avoiding straight lines and using curves here and there. I then indicate actions by using the (A) sign, highlight the urgent & important things using orange and non urgent but important using green, whatever blocks are left uncoloured are just for information and that’s it.  The colours could be different of course as long as you know what is what which is why I sometimes add a little legend at the end.

As you can see Agile note taking is cool – and you can try it anytime you feel like it, after all you only need an index card and a pen.

Posted by Plamen Balkanski at 15:23 No comments:

I signed up and already made a couple of loans.

What an awesome way to help people who want to make a difference. And loans can be as small as $25 - this is about £16 today.

I agree with Jurgen - this is much better than donations.
Donations are probably still the only way to raise money for certain causes but Kiva feels like the right way.

The concept seems to me very similar to Dr Yunus's Grameen bank who clearly has found a great solution for boosting people who want to work and just need a little bit of help.

And this is the key for me.. So if you would like to start by lending a free $25 then use this link  and start helping people who have found the drive to try and make a difference.
Posted by Plamen Balkanski at 21:10 No comments:

Last week I travelled to Vienna to participate in Jürgen Appello’s Management 3.0 training. I liked it so much that I decided to enrol as licensed trainer for this course (which is not the topic of this post but I felt it is relevant)

I also thought that the Roving Coffee idea was brilliant so I joined the evening meet up at Coffee Day in Vienna. Now Coffee Day is an Indian company and I have actually visited the first CoffeeDay shop in Bangalore so I felt it is a nice coincidence. Couldn’t taste the coffee there obviously as it was past 8pm when I arrived so I had beer instead (and it was good

My taxi driver completely messed up the destination address and the poor fellow didn’t speak a word of English so it was difficult to guide him with my superior orientation skills (those who know me well will recognise the irony). So I missed the beginning of the meeting and on my entry I was clearly expected to bring some ideas which I did although perhaps they were of the wrong kind. Anyway it was a lovely chat in which we decided that it is not a very good idea to start changing the world from Vienna mainly for historical reasons – something to do with WW1 I think although later on reading through wikipedia I realised that it was not a valid reason.  Having in mind that most of us were drinking beer I guess it was sort of OK.

Now about the title.. just before finishing the meeting Jurgen asked who wants to have a copy of his Management 3.0 book (he only had one copy). Everyone declared that they already have the book including myself so the first round wasn’t very successful. And then I had this great idea that if nobody wants the book then perhaps I can take it and give it to someone who is unlikely to buy it therefore doing my bit to change the world. Everyone thought it is a great idea so there it was - I had the book. Next thing though – Jurgen asks me – do you want me to sign it? Now here’s a game changer. That brings a bit of hesitation so I am saying – well if you sign it then it is more likely that I will keep it (which I do not want to do)… Jürgen repeats the question to which I suggest – fine, then write something that ensures the book cannot remain with me.. and here’s how the ‘Non-Plamen’ book is born!  See the picture below: 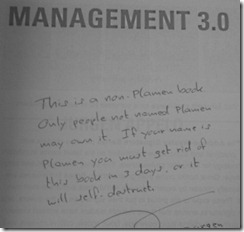 “This is a non-Plamen book. Only people not named Plamen may own it. If your name is Plamen you must get rid of this book in 3 days, or it will self destruct.”

Of course I had no intention of waiting for more than 3 days to see if the prophecy will be fulfilled. I got rid of the book before the 4th full day and I hope it will serve well its new owner!

And finally just to prove that this was all real and not made up – here’s all the participants in Roving Coffee in Vienna. Note that while we’re all smiling Jürgen is demonstrating that the camera of his phone isn’t very good!

Posted by Plamen Balkanski at 17:51 No comments: